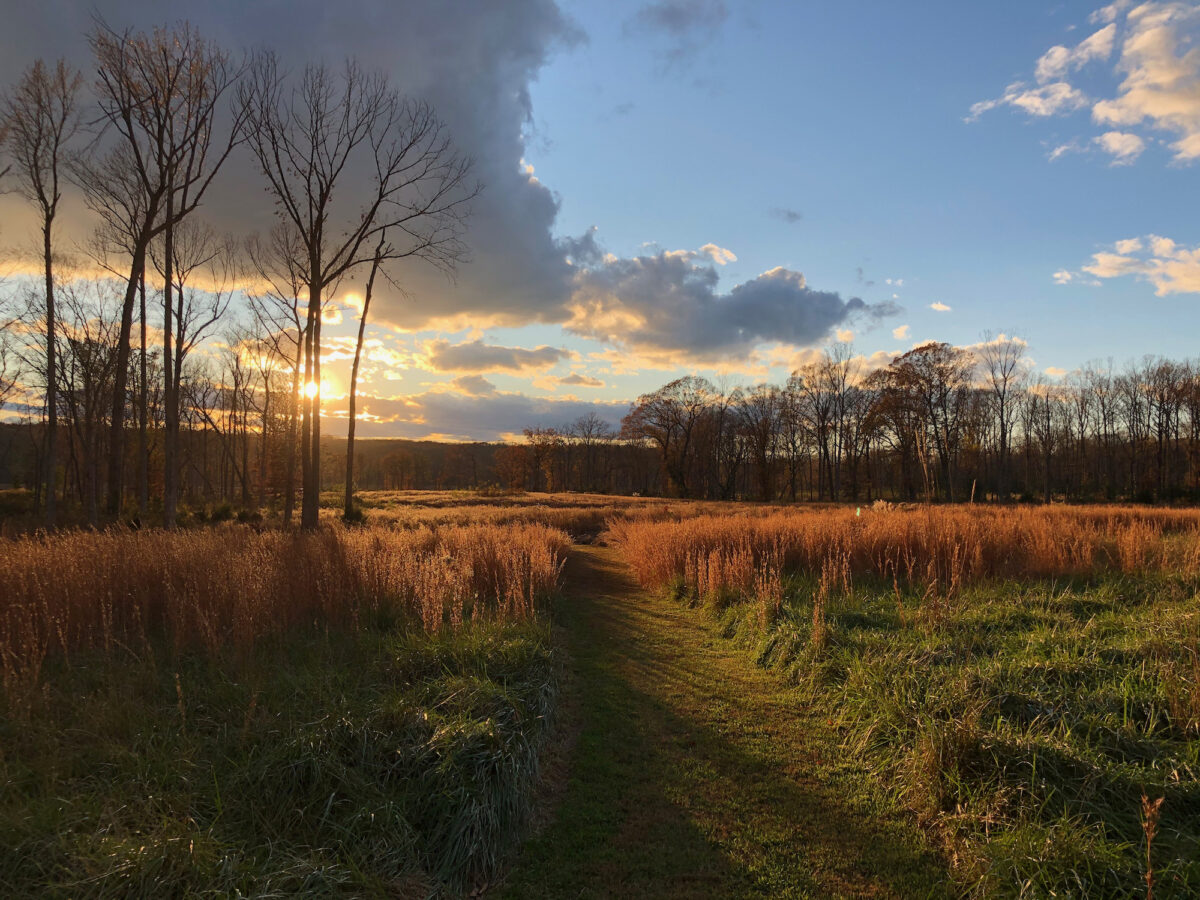 The Crow’s Nest Research Center has at least eight natural habitats identified by Larry Weaner Landscape Associates, which completed a Master Plan for Landscape Management (2017) of this property formerly known as the Lynn Farm. These habitats include:

Upland clear cut areas were logged between 2013-2015 in preparation for a 46-house development at that time. Native broomsedge, rushes, and warm season grasses constitute much of the groundlayer vegetation, with occasional remnant native ferns and woodland wildflowers. The CNRC is committed to maintaining these native grasslands as such because they represent a rapidly diminishing habitat – both regionally and nationally. The broomsedge meadows provide both open space and protective cover for visiting and nesting birds.

Ravines at the Crow’s Nest Research Center are semi-wooded and feature narrowly branched, smaller-stem native trees. Ravines were logged selectively in 2013-2015. Native sedges, rushes, and warm season grasses have a moderate and patchy presence in the ravine understory, with occasional native ferns, woodland wildflowers, shrubs, and tree seedlings. The invasive exotic annual Japanese Stiltgrass is abundant in most ravine bottoms.

The Pine Knoll has distinctive sandy soil conducive to lush growth of Pines. This area was subjected to selective logging in 2013-2015, hence the density of young pine trees competing for growing room. Groundlayer vegetation on the Pine Knoll includes native sedges, warm season grasses, lowbush blueberry, plus Oak, Pine, Red Maple, and Sassafras seedlings. Native turtles use the sandy banks of the Pine Knoll adjacent to the marshland for nesting from mid-April until mid-July.

Vegetation in the Tidal Shrubland is relatively undisturbed and exempt from recent logging due to the regular presence of water and often sloping nature of the habitat.

Plants observed along the edges of this habitat include Southern Wax Myrtle, Red Maple, native ferns, sedges, cattails, and rushes. Many other native plants likely are present yet need to be identified in a yet-to-be-conducted plant inventory for this habitat.

Turtles and birds use the Tidal Shrublands for nesting from early spring to mid or late summer. The Tidal Shrublands are not easily accessible and are best viewed from various clearly designated observation points on the property.

Freshwater Tidal Marsh bordering Accokeek Creek constitutes nearly half of the Crow’s Nest Research Center property and is contiguous with some of the most diverse and intact tidal marshes in the Potomac River drainage.

The most species-rich portion of this habitat is often the mixed marsh zone above the tidal water level which features native grasses (including wild rice), ferns, sedges, rushes, and wildflowers. Shrubs grow where the marsh transitions to upland habitats. To date, there is no plant inventory for this habitat.

The CNRC and the Virginia Department of Conservation and Recreation (DCR) have collaborated on several occasions to control the spread of the fast-growing invasive Phragmites australis, an exotic marsh grass that marsh fauna do not eat. Another fast-growing invasive plant is aquatic Hydrilla verticillata that grows abundantly in open water during the warm season; its presence in the CNRC wetlands is considered an ecological threat because it outcompetes native aquatic plants and causes oxygen depletion zones which in turn leads to fish kill.

The Pond at the Crow’s Nest Research Center is a man-made farm pond constructed in the 20th century when the land had farming functions onsite. Today, it supports the annual life cycle of bullfrogs and many other invertebrates and provides nesting and resting opportunities for a variety of bird life including ducks and green heron.

The several acres at the CNRC including the Barns, Cottage, Parking Areas, and Magnolia House are most actively used by people – property residents, researchers, and all other visitors. More than half of the perimeter of this human habitat zone falls within the Resource Protection Area (RPA) that is defined by a 100 foot setback from the tidal coastline.